Rayleigh damping is used in the analysis of soil structures to damp the natural oscillation modes of the system. The dissipation of the ground is modeled through the damping matrix [C], assembling the dissipation matrix of the individual elements (q) using the the following scheme:

In a system with a multiple degree-of-freedom, the critical damping ratio, λq at any angular frequency of the system, αq, can be calculated from (Bathe and Wilson 1976):

where λq is the fraction on critical damping and ω is the angular frequency. 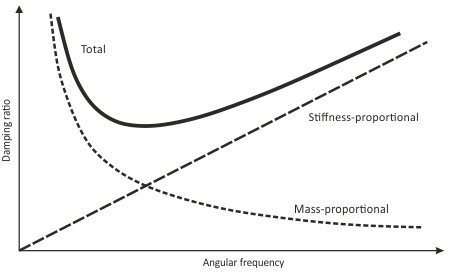 The variation of the damping ratio with the angular frequency αq is show in previous picture.

The damping in the ground is independent of the frequency, therefore, the choice of α e β must be made so that the damping values have minimal variations on the frequency range of interest. The constants are choices in such a way the damping is minimized at the fundamental circular frequency of the entire model because the first mode of vibrations has the highest participations factor of all the other modes. For this:

The center frequency of the model is defined as:

In Quad4M code the coefficients of Rayleigh are calculated as a function of two frequencies α1 e α2 by the following expression for each elements:

For each iteration the average shear strain is computed into each element and the damping curve are consulted for the estimate the correct damping. The value of ω1 (first angular frequency) is computed by solving the following system of equations:

where θ1 is the first mode shape. The fundamental Frequency of the model is calculated at the first iteration.

The Visual-Q4M automatically calculates the natural frequency of the model.